The software community scales and thrives on new updates. These updates are upgrades from the previous versions, with better features, performance, usability, and functionalities. Any product becomes more efficient, secure, and advanced on updating to the latest version of the technology it is working on.

Drupal, one of the most popular content management systems, has been offering regular updates for its CMS every six months. The latest update was on 3rd June last year. Enterprises or websites running on the earlier version of the CMS would require to migrate to the latest version to enjoy the complete functionalities that the new update and its upcoming versions would offer.

Unlike previous migrations to Drupal’s latest versions, this migration to Drupal 9 is like updating to a new version release. While not offering any new feature update, this is a major update owing to the newer versions scheduled for release.

If you are also planning for the migration to Drupal 9, here is a guide for you.

It hasn’t been too long since Drupal 8 was launched and all businesses were migrating to this new version. However, last year, Drupal announced Drupal 9 and everyone is contemplating their migration. It was officially released by Drupal on 3rd June 2020 amidst the lockdown.  This new version of Drupal cms is a call for all those hanging with the older versions of Drupal to upgrade their CMS.

Drupal 9 is built with Drupal 8 as the foundation. All the tutorials that you had learned to migrate to Drupal 8 apply here as well. Even the Drupal founder Dries Buytaert says, “The big deal about Drupal 9 is that it shouldn’t be a big deal”. Those that are running their site on the latest versions of Drupal 8 like 8.8.x or 8.9.x can easily upgrade their site to the latest version.

The reason why anyone would look forward to migrating to the newer version of any technology or framework is because of the new advancements that it has. Either the new version has made things simpler or offers better performance. While there are not many new features added in Drupal 9, the performance of the new version is sure to bring more people aboard.

Drupal 9 does not have some of the modules which one could see in Drupal 8 like Place Blocks and SimpleTest.

Many people might want to take the approach of waiting for a more stable version of Drupal 9 before migrating their site. However, Drupal 9 is unlike Drupal 8 or Drupal 7. It is an incremental point-release upgrade for Drupal 8. There are not many massive changes or new codes in Drupal 9 as anyone would expect.

It is certain that any new version gives an upgrade to the previous one. The drupal community has clarified that while Drupal 9 does not have any massive changes in features or code requirements, it will certainly offer better performance.

Most people think that upgrading to Drupal 9 would mean they would not be able to use the modules, configurations, and data of Drupal 8 of the same software. However, that is not the case. While building Drupal 9, the makers made sure to eliminate this issue. They made Drupal 9 backward compatible.

As Drupal 9 does not have any specific features, it is almost similar to Drupal 8.9. But what makes it different from this last version of Drupal 8 is that it does not have any deprecated codes. This means you get a cleaner code base with Drupal 9 migration. When migrating to drupal 9, the deprecated codes in each module in any of the versions of Drupal 8 would need to be removed. This would make it completely clean and offer better performance for the site running on Drupal 9.

While Drupal 9 doesn’t come with any new exciting features, the Drupal community has promised that they’ll roll out the next versions soon and we already have Drupal 9.1. This already has new and exciting features like the new experimental Olivero frontend theme. The upcoming models will have great and exciting new features. And in order to enjoy those, one would need to upgrade to Drupal 9 first. 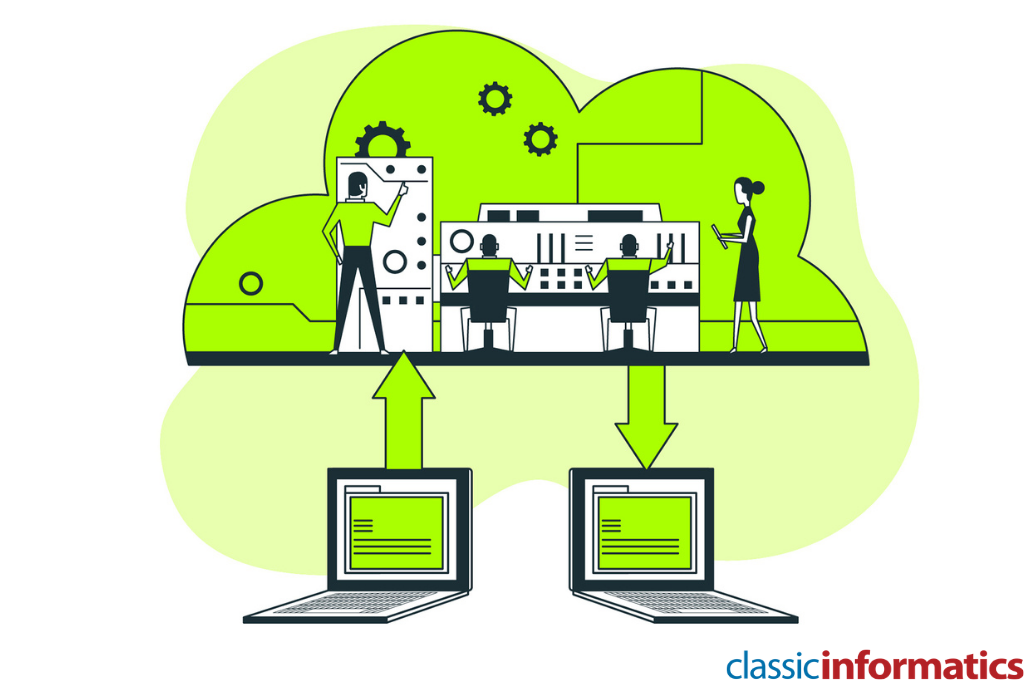 Most of the experts in the software community are calling the Drupal 9 migration the easiest upgrade in over a decade. Moreover, it also offers a commitment to similar easier upgrades even in the future. With such an easy upgrade to the newer version, one would never have the need to re-platform their site.

Another new upgrade offered by Drupal 9 is the new layout builder. Drupal site builders and content editors have been using the layout builder offered by Drupal to build layouts for content display with the drag-drop interface. The new Layout Builder replaces the PlaceBlocks module used in earlier versions making it, even more, easier to work with.

Even the third-party integration of Symfony has seen an upgrade in Drupal 9. Even Drupal 8.9 used Symfony 3. With this major version upgrade, third-party core dependencies including Symfony, Twig, and other similar dependencies are also updated to their latest versions.

Initial versions of Drupal, this CMS worked as the end-to-end platform solution. One used the same CMS for both backend and frontend. Be it creating pages or displaying content. However, with Drupal 9, it has become a headless CMS. This means that one can build the backend content repository on Drupal and use other technologies or frameworks other than Drupal to build the front-end. These front-end technologies would communicate with the backend via the application programming interface of API.

Steps to Migrate to Drupal 9

Even after the amazing features promised by the Drupal 8 update, over 70% of sites were still running on Drupal 7 CMS. And one might think that Drupal 9 is going to meet with the same fate. However, there are high hopes from Drupal 9. It has come up with scheduled version updates and one need not to wait for some unexpected major upgrade. Moreover, the Drupal community will pull any support for Drupal 7 and Drupal 8 by November 2022. So, sites running on the earlier versions will have to migrate to the latest version.

If you are also planning for the upgrade, here are the steps to follow.

If You Have Drupal 7

While most of the businesses on Drupal 7 migrated their site to Drupal 8 and its latest versions once they were announced, there were some who stuck to Drupal 7. There may be some apprehensions in mind considering the new version launch. However, those with Drupal 7 need not panic. The community support for Drupal 7 is available till November 2022.

However, this does not mean that they should continue sticking with the older version. It is always advisable to migrate to the latest version of any technology. Older versions might work but they may have bugs, lower performance, or less support available to sort any issue.

The next way to upgrade from Drupal 7 to Drupal 9 is to directly migrate it there. This way, you need not migrate your site to drupal 8 skip this version. However, all the considerations that you have to undertake while migrating your Drupal 7 site to Drupal 8. All that required during the migration like migration planning, platform requirements, tooling, paradigm shifts, etc., need to be considered.

If You Have Drupal 8

There is very little that you need to do if you have already shifted to Drupal 8. In fact, it is even termed the easiest upgrade in around a decade in the software industry.

The main steps about upgrading from Drupal 8 to Drupal 9 involves the following considerations:

Considerations While Upgrading To Drupal 9

There are several things that one should consider when upgrading the site from an earlier version of Drupal to Drupal 9. While it is important to follow each step of the upgrade process carefully, one should also consider the following things before making the upgrade. All the necessary updates or modules must be installed and the site should be running on a stable version of Drupal 8.

One thing that Drupal promised with Drupal 8 was a planned release. They ensured that the new patches would be released monthly while minor version upgrades would be provided every six months. With the Drupal 9 release, this is certain that they are living on the promise and would be rolling out the next versions of Drupal 9 soon. Drupal released the Drupal 9.1 version in December 2020, as planned, and would be rolling out the next in June this year. So, one needs to make their sites and developers ready for later updates. 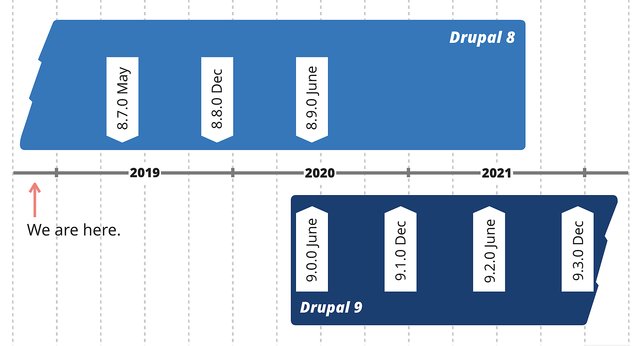 The hosting environment needs to be compatible with the update. It should be checked that all the necessary changes required for the hosting site in Drupal 9 should be there to make the shift hassle-free without any downtime.

Migrating from Drupal 7 or earlier versions of Drupal 8 means a major upgrade with lots of changes in the codebase. However, for a smooth and swift migration, it is advisable to upgrade to the latest versions of Drupal first like 8.8x or 8.9x. This would make the migration process quick and seem like a minor version upgrade.

As a version is upgraded, there will certainly be a need to utilize newer tools for creating, maintaining, and handling their site. For example, while shifting from Drupal 7 to Drupal 8, there were newer tools like Composer, Twig, etc., that needed to be incorporated. While there are no new tools required for Drupal 9 currently, one would certainly need to have a team of developers that is swift to adopt such tools. Many existing tools might depreciate in value in coming times as newer versions of Drupal 9 like D9.1 roll out. Organizations planning to migrate to Drupal 9 should be ready to embrace the tooling and paradigm shift.

Most developers usually have gotten accustomed to working with Drupal 7, hence why over 70% of the sites are still on Drupal 7. Before migrating to Drupal 9, it is imperative that developers learn or adopt the skills required to embrace the new version. For example, they might have to learn Composer to manage dependencies better. Implementation of the existing core code has changed in Drupal 9 and developers need to be well-versed with the same. In fact, developers need to learn new tools and strategies before upgrading the site.

Drupal 8 will have its end-of-life in November 2021 due to Symfony 3’s end of life. However, Drupal 7 will continue to have security team processes even after November 2022. You can hire Drupal developers and choose to migrate to Drupal 9 either via Drupal 8 or direct migration from Drupal 7. Either way, make sure your site is up-to-date.

Older versions mean more security threats and lagging performance. Get your custom code to become compatible with Drupal 9 and ensure that the core dependencies are updated. 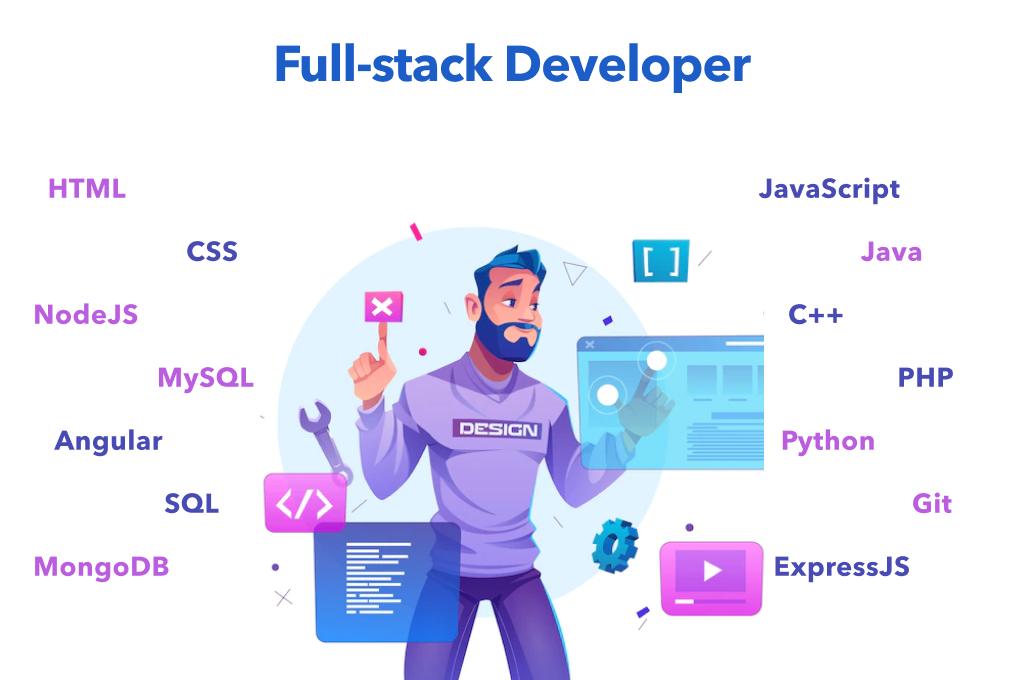 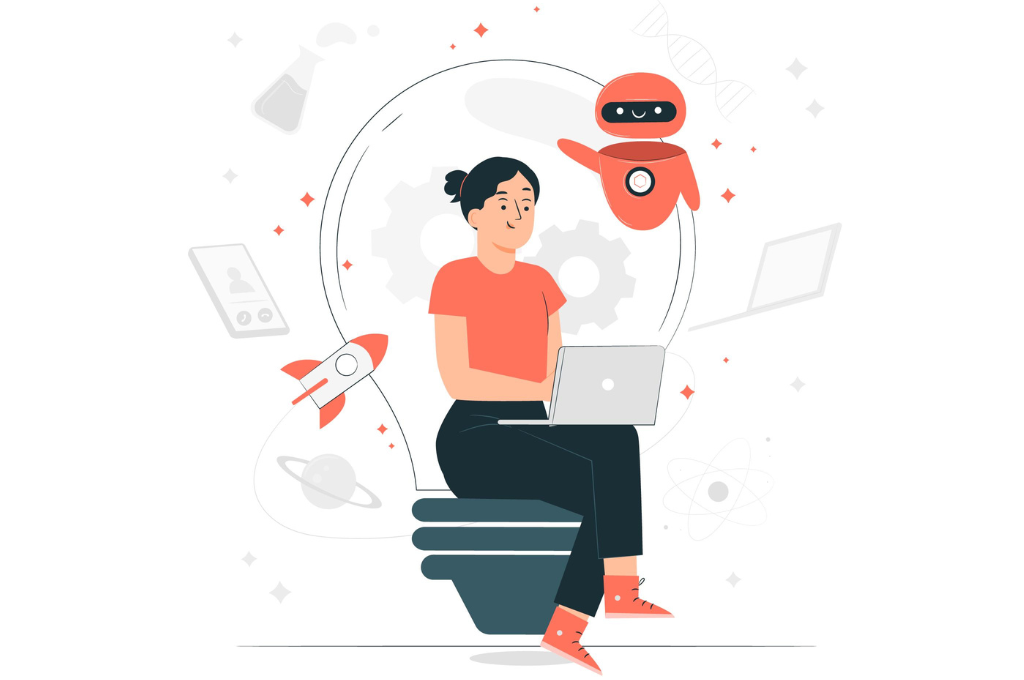 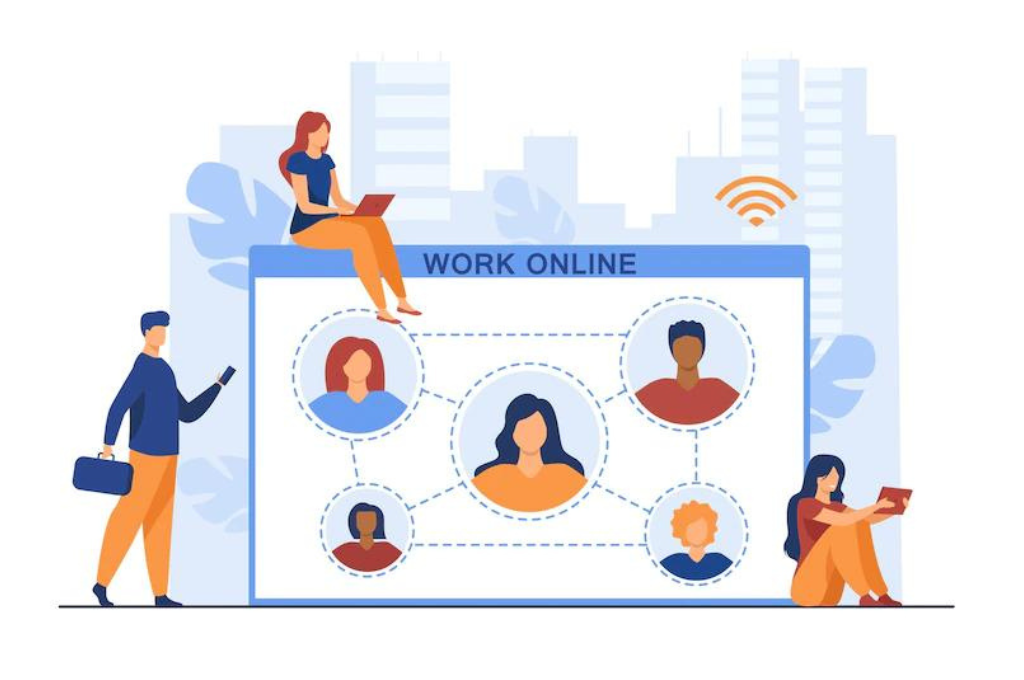